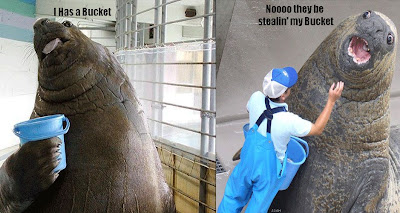 i notice a lot of "om nom nom" on the internet these days. i like it. it reminds me of cookie monster. (that's supposed to happen, right?) but i tend to get annoyed when i realize a phrase is cool. like in high school when all of a sudden all my buddies indulged in a 5 second prelude to every sentence: "duuuuuuuuuuuuuuuuuuuude!" better known on the internet as, "d00d!" then later T got into calling everyone a "dump" and it was quickly picked up by his roommates (as most of his phrases are). it became the word of choice for making fun of friends around his house. flashforward some years and bro-in-law introduced us to the "epic fail" thanks to some friend's proclivity for hanging out on nerd-core message boards. (i am certain i just used the phrase "nerd-core" improperly just now.) next thing you know, everything is a FAIL. almost literally. i was once at a party a couple years ago in Richmond when i noticed this picture taped to my friend's refrigerator. it was an enormous (real!) walrus with a bucket looking ecstatic, with the caption, "I HAS A BUCKET!" and then another picture of a man taking the bucket and the walrus looking very upset and the caption, "NOOOOOOO!! THEY BE STEALIN MY BUCKET!" and i laughed and laughed and laughed and laughed and seriously would not stop laughing the whole way home. the next day, i realized i was the last person on earth to have learned about lolcats.

how did i start talking about all this?

oh yeah. because i wanted to start a real blog post by mentioning the delicious sauted bananas i made for dessert tonight. my new thing is frying fruit. yum yum. and that's where this came from. because in my head, i literally heard a delicious noise and remembered there's a meme for that now: "om nom nom." except i don't want to say om nom nom. i want to say SCROMPH! because that's exactly it sounds like in my head. not the same ring to it, i know.

in other news, i did exercise today for 30 minutes. i think i read trust and estates for about the same amount of time. ah, early semester studying. it seems so easy and relaxed right now...*

*note: i am not on law review or any of the other major extracurriculars!
Posted by je at 10:35 PM