Day #1 down. Essays are over. I bombed the first part of the day. I have a vague recollection of panicking on the first essay and then my memory goes blank until lunch. Second half wasn't as bad. I felt like I knew what I was talking about, understood the call of the question and mostly remembered the rules. It was all about racing the clock on that part.

the suspense is killing me

But I wasn't finished! I had so much left to do! There's so much left unspoken between me and my bar lecturers. I am fighting SO HARD against the urge to stay up all night cramming. So hard. I want to puke. Gah.
Posted by je at 10:39 PM No comments:

Fear and loathing in a firetrap apartment

It's less than 36 hours until the bar exam. Holy You Know What.

As I told T over dinner tonight, I am alternating between terror and tranquility, feeling petrified and feeling peaceful... afraid...and accepting.

But he doesn't need me to tell him that. He's seen Dr. Jekyll and Mrs. Hyde both out in full force over the past weekend. Yesterday, he came home and started trying to fix our broken-in-a-three-digit-heatwave A/C while I was stretched across the floor listening to a lecture on corporate officers for the umpteenth time. "T..." I shouted, as he vacuumed dog fur from the vents, "what you're doing is REALLY ANNOYING!"

At which point, I wanted to hurl my giant book of MBE questions at him, but refrained probably out of heat exhaustion rather than actual self-control. Five minutes later, I'm pretty sure we were both asleep. At 6:00 p.m.

Between the heat and the stress, it's been a real bucket of sunshine up in these parts. I just can't wait 'til it's all over. And I pray I won't have to do it again.
Posted by je at 9:31 PM No comments:

Thoughts while I break from bar

After reading this post on white feminism & thinking about privilege playing itself out in the immigrant rights' movement and various legislation campaigns:

Thought: in discouraging police cooperation with ICE, is there something problematic/privileged in focusing on police as gatekeepers to protection from DV?
Posted by je at 1:08 PM No comments:

BETTER NOT TELL YOU NOW

"Am I going to pass the bar exam?" I asked the Magic Google Ball. 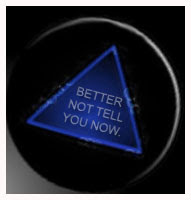 I can't write anything at all right now, but I did discover this gem from Thanks, But No Thanks. If you want an update on me or any other loved one (including yourself, if you are an unfortunate bar candidate also trolling around like a spider-bot looking for answers), I recommend clicking over and reading it.
Posted by je at 1:47 AM No comments:

Hey! So in three days, I turn 30. And I hope that I remember to pack a pen and a journal to write about and reflect on turning 30. But I'm not doing it here. Maybe when I get back.

Instead, I'm trying to focus on studying for the state-specific portions of the Bar, and kind of obsessively calculating in the back of my mind at all times what the likelihood is that I'll not pass.

Tomorrow, though, we're headed back down to VA to see my best friend's baby turn 1 (!) and then go camping. Yay! We did that last year for my birthday, and it was awesome. Maybe a little tradition in the making? Who knows.

Oh yeah, and I pretty much didn't do any of the things left to do on my 30 before 30 list since the last time I posted. But that's cool. It just gives me some things to work on over the next year!
Posted by je at 6:42 PM No comments: