I have to remind myself that the summer has not even begun. This late spring will probably have flown by, in retrospect. Now, it is dragging on like the feet beneath me. We have not made a decision. At least, we haven't made a decision about whether to move or stay put. There are some other things we have decided on, however: living as a team, putting family first, making the most of our days, being young, striving for happiness, feeling the love. Strangely, I'm just not that worried about it. I know that whatever happens, we will be okay. That's a liberating feeling.

On the other hand, at some point I have to start facing the fact that I will be a student again. My progress on this point has been minimal. I'm reading Crime and Punishment, which is one of those books that always calls to mind a Sesame Street skit with the Count, reading in a dusty old chair. (I may be confused.. if you have the time to look for that skit, I found an episode guide.) The book is good, but I think I have a long way to go.

Who am I kidding? I have absolutely no idea what to expect. I had my first law school dream the other night. It involved my schedule, I think. I'm wondering if this is going to be my chance to prove to my subconscious that I can actually go to school without losing my schedule/forgetting to put on a shirt/ignoring all my assignments until the day of the test. It's kind of weirding me out that I'm going to be donning that "student" label again. But it's also kind of cool.
Posted by je at 1:30 PM No comments:

Everybody should spend some time on the 20 Questions website. It reads your mind, and if it doesn't, it's still very amusing! For kicks... I am going to play and enter every question and response here, to see if it can guess that I am thinking of a blog. Ready? Go!

You won! What you were thinking of is not in my knowledgebase.
Posted by je at 10:00 AM No comments:

This morning I heard a pop song on the radio, the kind that has a pleasant tune but generally gets under my skin. I was thinking about how as a kid, that pleasant tune would be enough to make me really happy. I used to listen to a lot of radio when I was a child, and happy-sounding songs always lifted my spirits. It was that simple.

I got to thinking about all the ways that life was simpler as a kid. In most ways, I feel like I'm fundamentally the same person I was back then. I mean, the same soul, the same history, the same identity. So where along the line did I turn into an adult, and what makes it so hard now to adopt that light-hearted childlike attitude?

Here's a brief list I came up with of things that I was simply not aware of as a kid:
- Where gas comes from, and its association with violence around the world.
- Other kids in other homes being hurt and abused.
- Foreign policy that could potentially lead to war.
- Jobs that don't make you happy but pay the bills
- Heartbreak
- The finality that comes with death
- Not being able to have it all; having to choose between dreams, hopes.
- The speed with which a year passes
- The responsibility of privilege
- Borders
- Poverty
- "Life isn't fair" meaning more than just that my brother got his way over me.
Posted by je at 9:23 AM No comments:

Huge story in the New York Times today that virtually nobody is talking about: immigrants dying in federal detention centers.

Nina Bernstein's well-researched article represents true investigative journalism at its finest. I recently read about the death of Francisco Castaneda who developed penile cancer while he was being held in a detention center in California. Bernstein's article does not cite Castaneda's death, but tells tragically similar stories of other immigrants who died from medical neglect while in ICE custody from 2004 to 2007. Since nobody is talking about this issue today, I thought I'd honor the piece by posting some of Francisco Castaneda's testimony to the US House Subcommittee on Immigration:

Good afternoon. Thank you to Chairwoman Lofgren for inviting me, and to the Immigration Subcommittee for holding this hearing. My name is Francisco Castaneda. I was held in immigration detention for over 10 months, and was just released this past February due to my medical condition, after many letters from the ACLU were sent on my behalf.

First, I would like to tell you a little bit about myself. I am 35 years old. I came to the United States from El Salvador with my mother and siblings when I was ten years old to escape the civil war. My family moved to Los Angeles where I went to school and began working at the age of 17. My mother died of cancer when I was pretty young, before she was able to get us all legal immigration status. After my mom died, I looked to my community for support, and found myself wrapped up in drugs instead, which, today, I deeply regret. I worked, doing construction, up until I went to prison on a drug charge, where I spent just four months before I was transferred into ICE detention.

When I entered ICE custody at the San Diego Correctional Facility in March 2006, I immediately told them I had a very painful lesion on my penis. After a day or two, Dr. Walker examined me and recognized that the lesion was a problem. He said he would request that I see a specialist right away. But instead of sending me directly to a specialist, I was forced to wait, and wait, and wait, and wait. All the while, my pain got worse. It started to bleed even more and smell really bad. I also had discharge coming out of it. Apparently the Division of Immigration Health Services was deciding whether to grant the request. Dr. Walker submitted the request more than once and, after more than a month, it was finally granted. When I saw the oncologist he told me it might be cancer and I needed a biopsy. He offered to admit me to a hospital immediately for the biopsy, but ICE refused to permit a biopsy and told the oncologist that they wanted to try a more cost-effective treatment.

I was then referred to a urologist, Dr. Masters, but I only got to see that urologist two-and-a-half months later, after I filed sick call requests and grievances with ICE.

The urologist said I needed a circumcision to remove the lesion and stop the pain and bleeding, and also said I needed a biopsy to figure out if I had cancer. ICE and the Division of Immigration Health Services never did either of those things. They said that it was "elective surgery."

My pain was getting worse by the day. When you are in detention, you can't help yourself. I knew I had a problem, but with everything you have to ask for help. I tried to get medical help everyday. Sometimes I would show the guards my underwear with blood in it to get them to take me to medical, but then they would say they couldn't do anything for me. All they gave me was Motrin and other pain pills. At one point, the doctor gave me special permission to have more clean underwear and bedsheets, because I was getting blood on everything. A guard from my unit once told me he would pray for me because he could see how much I was suffering.

Several more requests for a biopsy were denied. They told me in writing that I could get the surgery after I left the facility - when I was deported.

In late November 2006, I was transferred from San Diego to the San Pedro Service Processing Center. When I got there I immediately filed sick call slips about my problem. After a few days I saw the doctors. I told them about my pain and showed them the blood in my boxer shorts and asked them to examine my penis. They didn't even look at it - one of them said I couldn't be helped because I needed "elective surgery." They just gave me more pain pills.

In the middle of December, I noticed a lump in my groin. It hurt a lot and was a little bit smaller than a fist, so I filed a sick call slip about it. Another detainee told me it could be a hernia. I never got any treatment for it, and I later found out that was a tumor, because the cancer had already spread.

...Finally, around the end of January, immigration agreed to let me get a biopsy. They made an appointment with the doctor, but just before the surgery they released me from custody. A doctor actually walked me out of San Pedro and told me I was released because of my serious medical condition and he encouraged me to get medical attention.

The first thing I did was call the doctor to see whether I could still get my biopsy. The secretary told me ICE had cancelled it. I then went back to the emergency room at Harbor-ULCA - the same place they had left me in the waiting room in shackles - and I waited to see a doctor and finally get my biopsy. A few days later, the doctor told me that I had cancer, and would have to have surgery right away to remove my penis. He said if I didn't have the surgery I would be dead within one year. On February 14 - Valentine's Day, nine days after ICE released me from custody, I had the surgery to remove my penis. Since then, I have been through five aggressive week-long rounds of chemotherapy. Doctors said my cancer spreads very fast - it had already spread to my lymph nodes and maybe my stomach.

I'm sure you can at least imagine some of how this feels. I am a 35-year-old man without a penis with my life on the line. I have a young daughter, Vanessa, who is only 14... The thought that her pain - and mine - could have been avoided almost makes this too much to bear.

I had to be here today because I am not the only one who didn't get the medical care I needed. It was routine for detainees to have to wait weeks or months to get even basic care. Who knows how many tragic endings can be avoided if ICE will only remember that, regardless of why a person is in detention and regardless of where they will end up, they are still human and deserve basic, humane medical care...

Siler City used to be a ghost town. 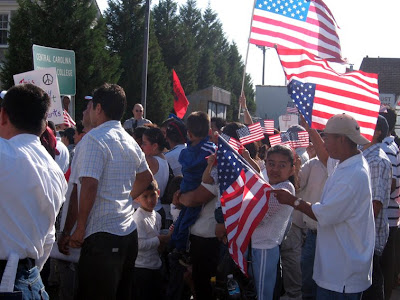